We arrived at Smuggler’s Cove around 1400 hours on Saturday the 25th. The entrance was so small I almost passed it. Thankfully there is a sign marking the channel. (No, I did not take this picture… I was too busy trying not to hit the rocks)

We were about mid tide so the entrance was bit tight but with our able crew on bow watch we did very well.

This about the same tide level when we came through with Pellucidar.

A little history on Smugglers’ Cove. It was used to collect loads of Chinese labourers who asked to be smuggled into the US in hopes of finding work after the completion of the Canadian Pacific Railway. Later it was used as a staging area for booze during the prohibition.

There were a couple sailboats already anchored in the outer bay so we went to the middle bay to scope out our options. This would be our first time performing a stern tie so we were being extra cautious and wanted lots for room for error. We had talked this through with the crew at great length and felt like we had a good plan going in. We floated in the middle while Damon and I  lowered the dingy so it would be available for securing the stern. We then picked out our stern tie location and maneuvered the boat to a position where we could lower the anchor. Linda got a good anchor set and we took the dingy to shore with the stern line and attached it to the chain set in the rock for this purpose. We secured the stern line to the boat and while Linda let out anchor rode, we pulled in the stern line until we were positioned where we wanted to be. We allowed some slack in both ends to allow for tide fluctuation during the night. Our first stern tie was a success and fairly painless! I should have known our crack crew would perform flawlessly!

Once we were comfortable with our anchor and stern tie, we lowered the kayak and made ready to explore the bay.

Smuggler cove is made up of what I would call three sections. An outer, middle and inner bay.

We could have gotten Pellucidar into the inner bay at a higher tide but then you are limited to a departure by the tide schedule. This time of year there was plenty of room and we saw no need to put ourselves in a position regulated by the tides.

Coyote posing for his / her picture

After dinner we heard a pair of Canadian Geese that would not stop squawking. They were swimming back and forth along the shore we were tied to. It took us a while but  we finally discovered what all the racket was about. There was a coyote on shore and they were not happy with his presence. We assume it was messing with or around their nest. We watched an incredible show between the coyote and the geese for over an hour before he finally wandered off up the hill. The geese continued to voice their concerns for at least another hour. It was spectacular to watch.

You can see the geese on the right. The coyote blends into the shore on the left side about 1/3 down the picture.

That was a hard act to follow but He had one more special display up his sleeve for us that evening. The sunset really put an exclamation mark at the end of our first day out!

No words can describe something like this. What a way to finish our first day out!

The next day we took the dingy to shore and hiked the trail around the point and then back out to the road. 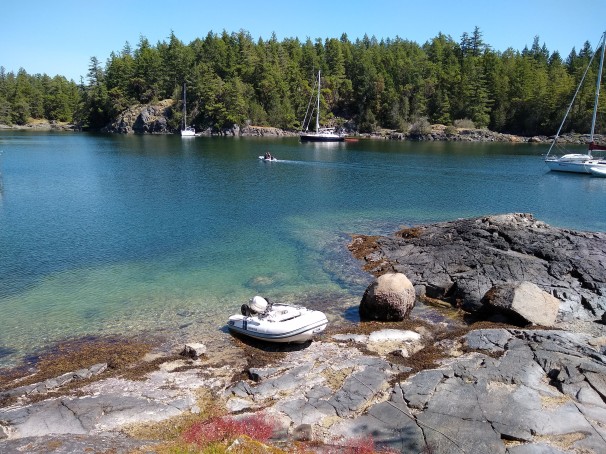 This is the dingy at a reasonable tide level…. Not so much when we finished our hike!

The trail out to the point was an easy walk and gave us a unique view of Welcome Passage we had come up the day before. It also provided us with a different perspective of the entrance.

We even had the pleasure of watching a group of kayaks come into the bay from across Welcome Passage. We met them at the end of the cove later that day during our walk. 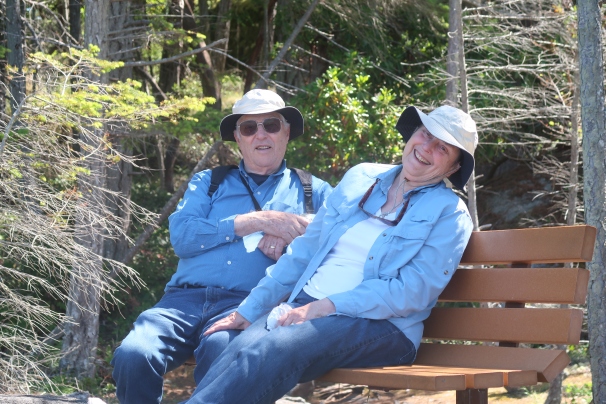 We finished our hike around the point and decided to continue the other way on the trail that takes you back out to the road. This was a very nice walk along a good trail that wrapped around the end of Smuggler’s Cove then through a mix of marsh and wooded areas.

There was abundant evidence of beaver activity all around this area. It seemed the beavers had built dams and flooded a large section. The trees seemed to indicate a change in their environment and were not doing well sitting in all that stale water. 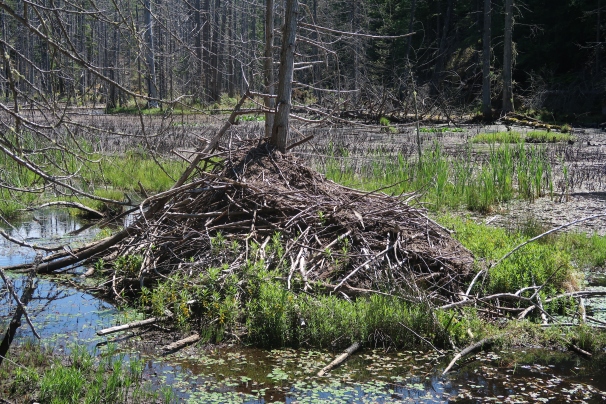 One of the beaver dams we saw during our walk.

We enjoyed our walk through the woods. The trail was well groomed and in great shape!

Happy hikers enjoying all that life has to offer!

Sign marking the trail from the highway end. Popular trail as we passed many others enjoying the day

The tide had dropped a bit during our walk so getting our “dingy boat” back to its watery environment was a bit of a challenge but we got it done. (I was too irritated with myself to take a picture. Suffice it to say it was a bit of a project)

We had left Damon and Leslie at the end of the cove while we retrieved the dingy. We should have beached it there to start with but I digress!

That evening we took turns cruising the bay in the kayak. It was another beautiful night and we just floated around and took it all in

Next day we were up early. Hoisted anchor and released the stern line. All went as planned. Soon we were out in Malaspina Strait where the wind was light out of the South and we had a small opposing current. That did not discourage us from putting up the spinnaker. Twice. We had it up once and the wind immediately died. We ghosted at about a knot and a half for a few minutes and finally decided to pull it down. We no sooner got the spinnaker down then the wind filled in ever so slightly. Back up went the spinnaker…. 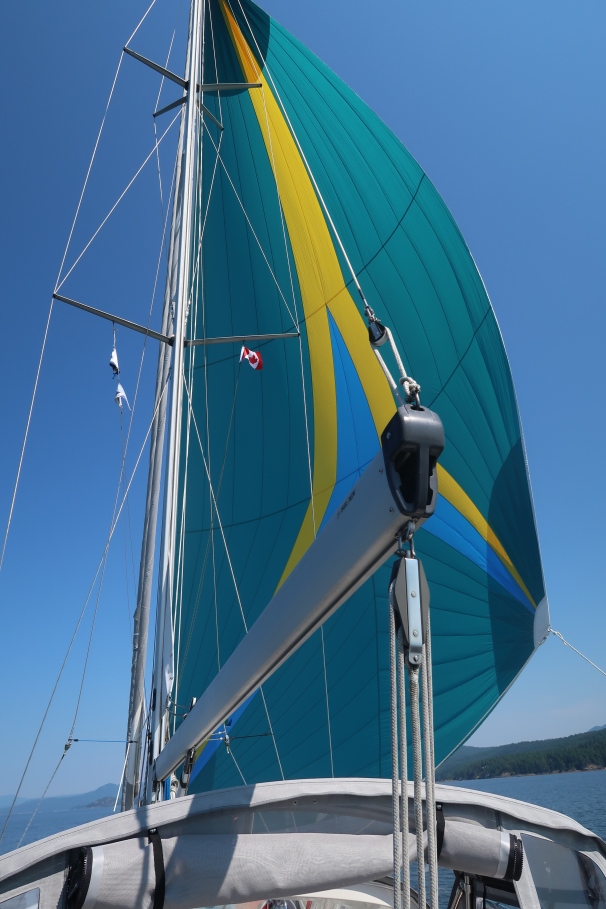 We will leave you here with a full spinnaker as we sail North up Malaspina Strait.