We are fortunate to be near some of the most beautiful and sought after sailing areas in the entire world. Any one sailing the Salish Sea with any regularity knows there are wide straits to cross, deep fijords, busy harbors and secluded anchorages. As we all know when you see a rose you know there will be thorns. One of the challenges with anchoring in the Salish Sea is the bays are often very deep right up near the shore requiring a skill known as stern tieing. The process is to drop your anchor on the edge of the drop then back toward the shore where you tie to a tree or in some cases, a ring that has been placed in the rocks for just such a purpose. The line used for this purpose is either a floating line or webbing set up on a reel and mounted to the stern of the boat.

I have “moody” buddies. We have a Moody sailboat and we have other buddies “friends” with the same brand, hence Moody buddies.

My friend Walt, who owns a Moody 46, made a stern tie reel that is both easy to build and functional.

He helped me take a few measurements and provided me with some of the materials to make my own.

Walter discovered the Magma kayak racks are perfect for a great foundation On this project.

These come as a pair but we only need one. Walter located a pair on EBay at quite a bargin and were were able to share the cost. We were in business!

First lets do a little measuring 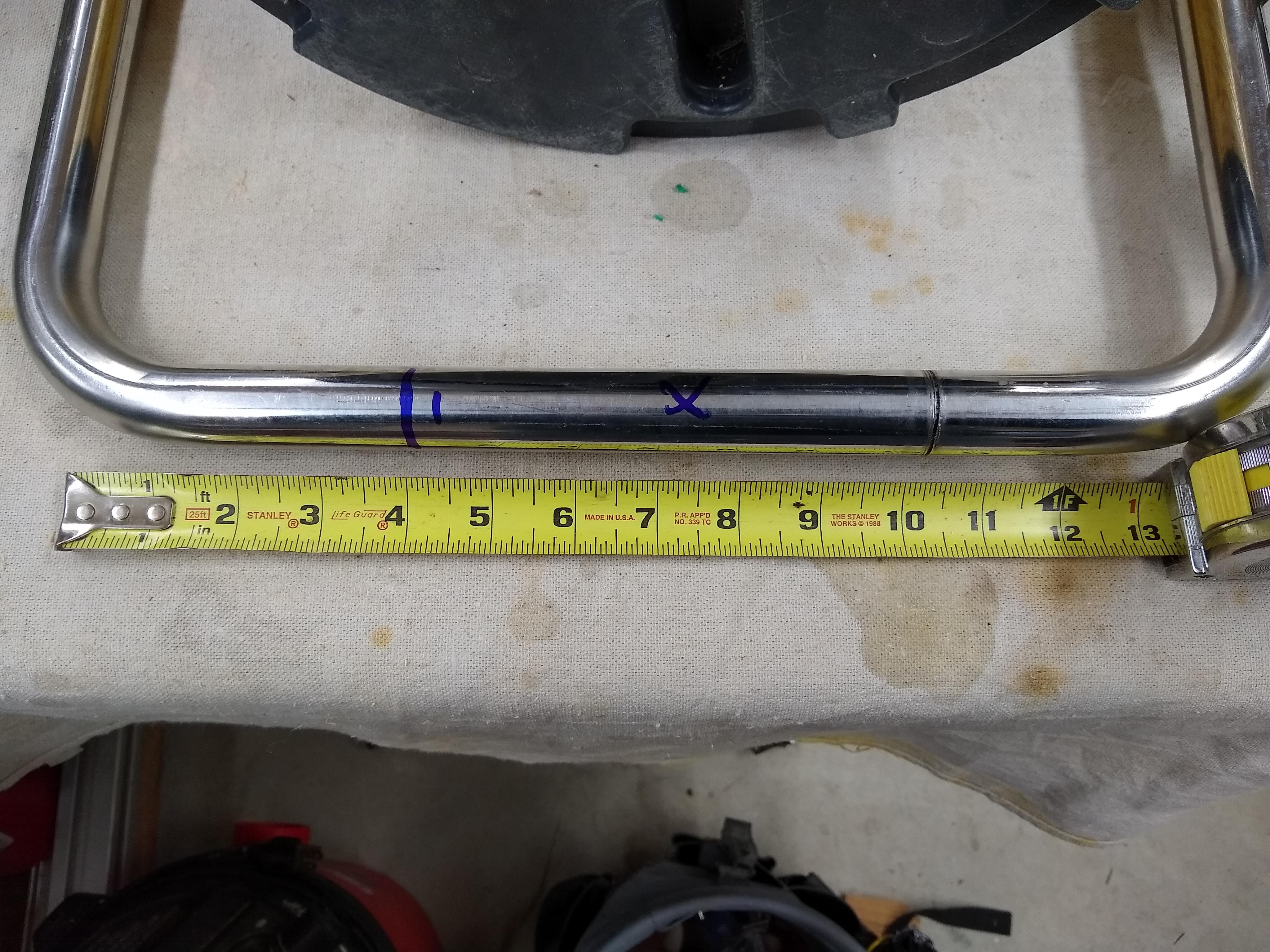 Bottom line is take 6″ out of the short side and 9″ out of the long side. It should look like below…..

Next we need to find a piece of pipe to connect it all back together.

We need to relieve the pipe so it will slide into the other sections. I see new tools on the horizon! RotoZip was the ideal canidate. (I already had one) 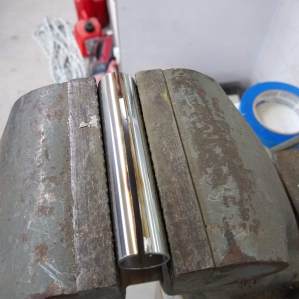 Update to 3.0. Even with through bolts there was too much movement so I asked my friends at Railmakers Northwest to run a weld around it for me. The long piece seems to be fine with just rivets. 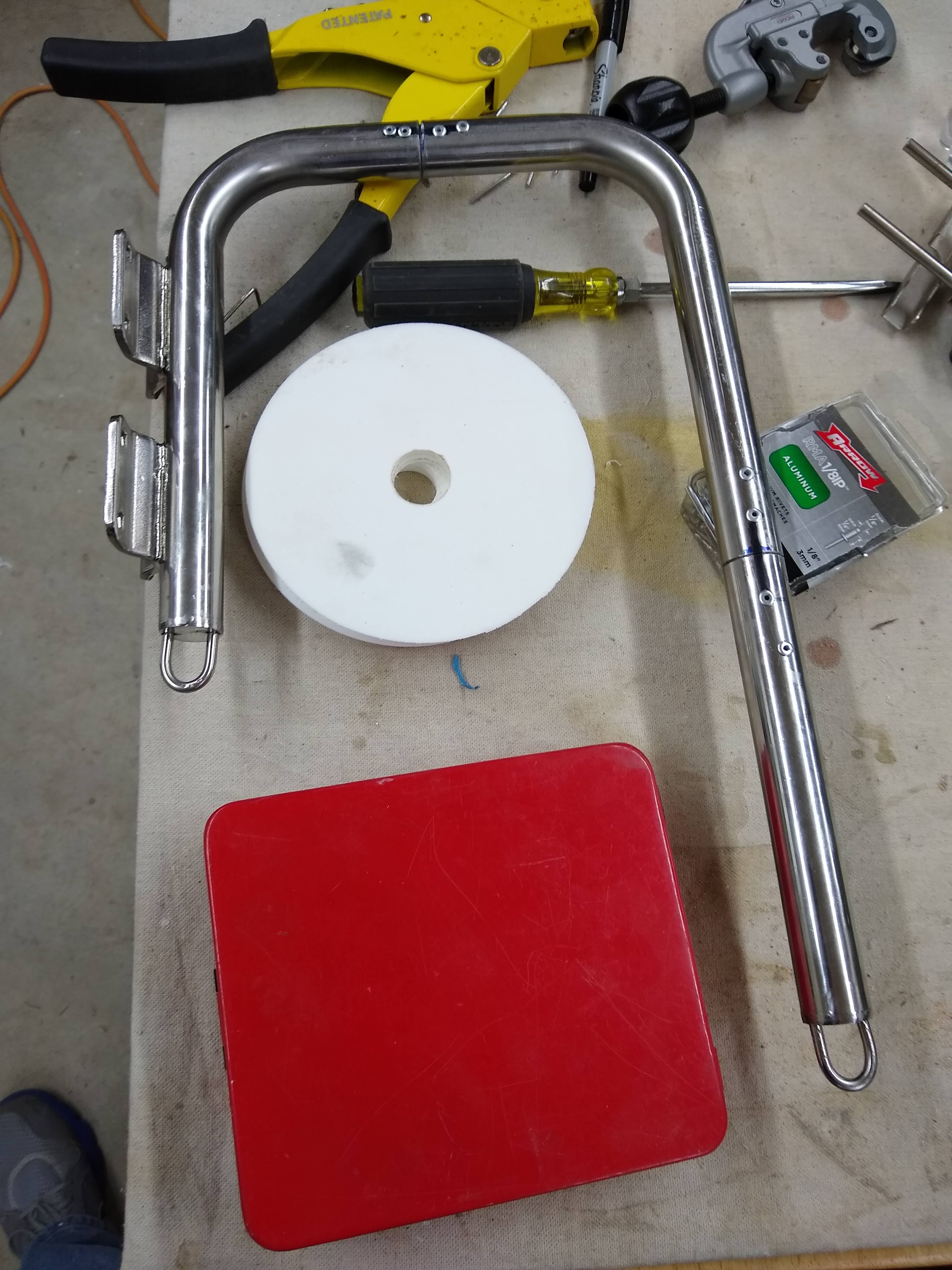 Next we cut circles! We use the starboard as end caps to mount the reel to the 1″ OD tubes.

Once the end caps are cut out, we find the center and drill a 1” hole to slide over the long section of the pipe. I clamped an extra section of pipe in the drill press so as I rotate the disc I would have holes equal distance to the center. (This high level of thinking does not always happen with projects of this sort) 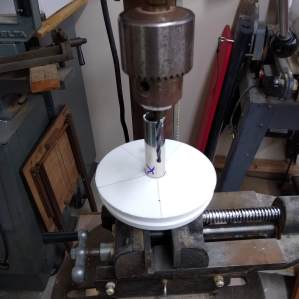 Next I pulled the line off the reel and piled it carefully into a large plastic tote. I dumped all of Linda’s Christmas decorations out to make room for the line but as long as this gets done by next Christmas I should be fine – right?

Then we carefully lay the discs on the reel and use the holes as guides to drill the mounting holes where we will mount the discs. I drilled the first one then installed a bolt, drilled the next one and added a bolt and so on. This way everything (sorta) lines up.

I ran the bolts from the inside out to minimize any sharp edges catching on the line. 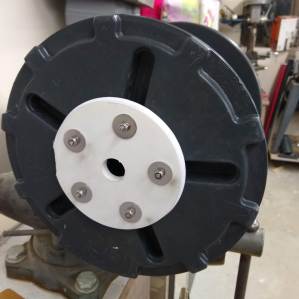 Now we are ready to mount the reel to the stand, add a collar so it won’t slide off and we should be ready to load the line back on the reel. I used a simple 1″ PVC adapter and did a little slicing and dicing 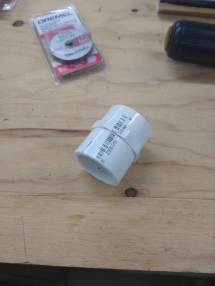 Next I drilled and tapped for a 1/4 x 20 set screw. I also drilled an indent in the shaft so I did not have to put too much strain on the plastic collar. 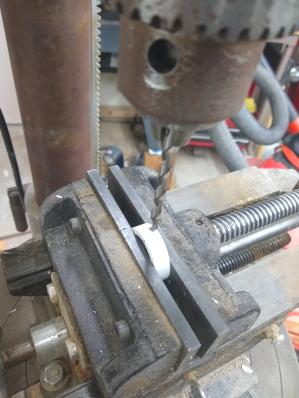 I drilled a hold in the center section of the reel, threaded the line through and put a stopper knot on the inside. I could just see me getting to the end of the reel and watching the line swim toward shore. It won’t take a lot of strain but should keep the line where I can reach it if needed.

I assembled everything and loaded the line back onto the reel. The finished product!

Now we just have to learn this new technique called stern tieing! It’s always something!