We dropped my sister and her family off at the dock, re-provisioned and headed South toward Gig Harbor. John and Jill are part of our Moody family who we met at our Moody Rendezvous a few years back. They were kind enough to host a BBQ for us and introduce us to their friends, Kevin & Cressie. Kevin & Cressie had made the trip from the NW to Sea of Cortez and they agreed to let us pick their brains over some amazing food.

We had a very calm run down to Blake island and decided to pick up a mooring bouy on the East side. Linda wanted to make a run at the bouy and did a great job. I was able to snag it on the second pass. It takes a 16 ton boat a moment to stop so the first attempt saw us waving at the bouy as it passed by the starboard side. She nailed it on her second attempt and stopped the boat right next to the marker. We took the dingy around to the dock to register and visited with a few of the other guests while we wandered around the island for a bit. We headed back to the boat just as it was getting dark.

The next morning we woke to a good North wind. Normally when I start rigging the spinnaker Linda gets a little “cranky” but we have done this a few times now so we are working better as a team. Once rigged, we talk through how we are going to execute the launch where before I would launch it then communicate what should have happened. This works much better as you can imagine. 🙂

We rolled out the main, slipped the lines on the bouy and released the main sheet while Linda guided the bow down wind.

Our spinnaker is in a sock and for once I had all the lines right! Spinnaker filled, we trimmed the main and spinnaker lines and had an awesome run all the way to Gig Harbor. I think we only had to gybe 4 times and three of those were good!

I did not notice the bird poop on the window when I took the shot!

My very first sailing experience was on an overnight trip to Gig Harbor. This bay has always held a special place in my heart and just arriving at the entrance brings back that warm feeling.

Entering the harbor is like going back in time. It is such a peaceful setting I could spend a week here if not longer.

We did a little tour of the harbor just to get the layout before we dropped anchor. We wanted to establish our pick up point for tomorrow’s BBQ. 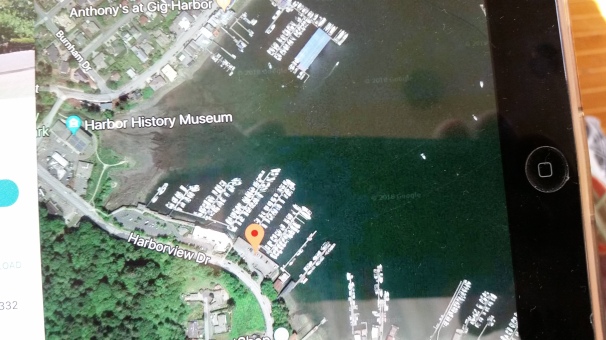 Once settled we launched the dingy in search of our friends, John and Jill’s Moody. Did not take us long before we located their boat at the marina.

Doing reconnaissance requires energy and energy requires fuel. So our next stop was the world famous Tides Tavern to grab a bite. What is it about arriving at a restaurant via their dock, tying up and walking up the ramp to dinner that makes you feel so special?

It’s silly but I think even the food tastes better and the Tides does not disappoint.

The next morning was beautiful. I had some items to finish up for work. Sitting in the cockpit with a hot spot and cup of coffee is the best office ever. I highly recommend it!

Once I “punched out” of work mode we took the dingy over to the public dock to grab some breakfast and wander around town for a bit. We landed at Kelly’s Cafe and Espresso off Pioneer Way. It was cozy, the staff friendly and the food was good. Perfect combination.

That afternoon John picked us up at the dingy dock and wisked us away to an incredibly fun evening. It was a mixture of amazing food in what seemed like endless quantities and the company of old and new friends. It truly was a magical nite and we can’t thank John and Jill enough for hosting.

If you’ve never been to Gig Harbor the entrance will give you pause the first time through (and the second and the third) We took our time the next morning as we were waiting for a little more water to fill the narrow entrance. We left Gig Harbor in our wake under clear sky’s but very little wind. Our destination was the Tacoma waterfront. 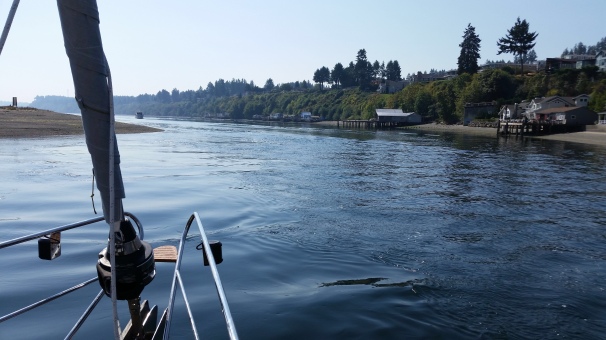 The run to Commencement Bay was pretty uneventful but the scenery was spectacular. Lots of people out fishing, crossed paths with the Vashon Island ferry, and dodged a few tug boats going about their daily chores. We had or so we thought, reliable information on the Murray Morgan bridge. That proved not to be the case. The bridge is not “manned” so you call ahead and someone comes down to raise the bridge for you. It sounded like he is responsible for 3 different bridges and depending upon the priority it could take a while. I think I’m pretty important but for some reason others don’t see it my way……

We contacted the bridge via VHF and were told it would be at least an hour but could be longer depending on commercial traffic. They would do their best to get there quickly. It was a beautiful day so we just tied up to the Foss Seaport public dock, just to starboard as you enter the Thea Foss waterway, to wait our turn.

As we waited we visited with a fisherman on the dock and then were treated to a dolphin show. 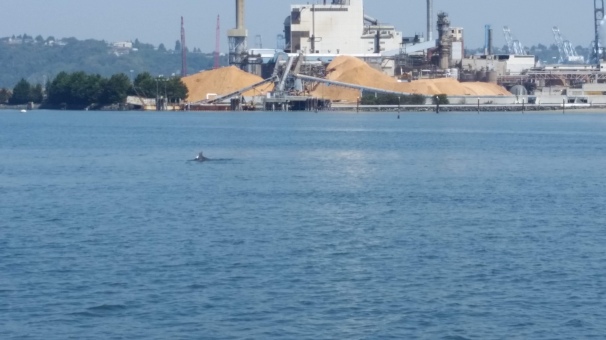 It was not long before we got a call from the bridge and were on our way again. The bridge tender was super accommodating. He asked us if we had a departure date and time. He then made arrangements to be on site when we were ready to depart the next morning. How cool is that?

Milltown Sailing Club has reciprocal privileges with many clubs in Puget Sound. Dock Street Marina, right in front of the glass museum, is one of those select spots.

Looking through the doors to Jonnies Dock across the waterway

Once we got the boat settled and arranged for a pump out the next morning, we decided to go for a walk and grab a light snack. We found ourselves about 3 blocks away at the Social Bar & Grill. This was a nice enough place but not really our type of restaurant. There are plenty of other choices in the area but we did not feel like putting out much energy that day. We could have dropped the dingy, crosses the waterway to Johnnie’s Dock but we decided to just whip something up on the boat. That turned out to be a great decision. The sunset was spectacular as we walked along the water way with the Glass Museum lit up in the back ground.

The next morning was a travel day. We had an appointment with a bridge at 1000 and right on schedule the bridge came up and we bid farewell to Tacoma. We enjoyed our stop here and will be back again I’m sure.

We motored out Thea Foss Waterway, into Commencement Bay under another clear blue sky but not much wind.

We caught the tide just right as we rounded the South end of Vashon Island and headed north in Colvos passage as demonstrated by the knot meter.

As we cleared Colvos passage we cut in behind Blake Island and headed for Rich Passage. I’ve never really checked out the other side of Blake from the water. We may pick a bouy on the South side next time. Our mooring on the East side was nice but we rolled a bit with each passing ferry. Active Captain seem to favor the West side. We may have to check that our as well. Another excuse for a cruise!

Through Rich Passage we met the ferry coming from Bremerton. This is alway a thrill as this passage always seems a little tight to begin with. 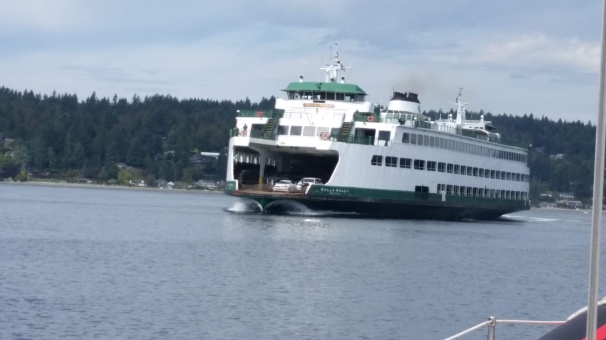 As we cruised in Port Orchard heading North we caught a low flying jet out of Mc Chord. 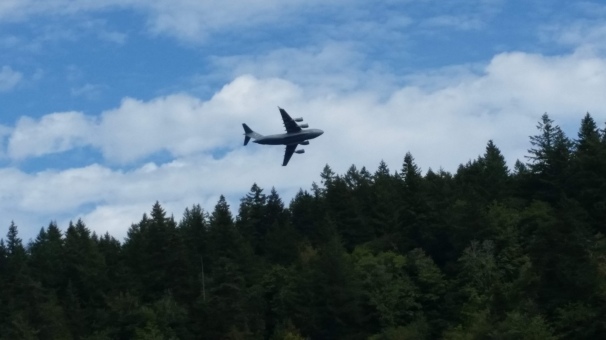 We tried to get the reciprocal in Poulsbo but they were full so we spent a quiet night in Manzanita Bay. We love this little anchorage and it sets us up nice for a trip through Agate Pass the next morning.

We delayed our departure by a couple of hours to allow a little water to flush out. I know the charts all “say” we have enough room to clear the bridge but…….

This was our first time through Agate Pass with Pellucidar and we would be approaching the bridge on a strong ebb tide.

I’m happy to report we cleared the bridge and arrived back in Everett safe and sound after a great week on the water.

Not much sailing going on this winter as we prepare for retirement and extended trips beginning this spring.