After insuring our fellow sailor had help on the way, we continued on toward False Creek. Our sailing club, Milltown Sailing in Everett, has reciprocal moorage agreements with many other clubs in the Salish Sea. False Creek Yacht Club was on the list.

False Creek really is there but we were starting to wonder for a time. The charts all showed an opening but you won’t see it until the last moment. Tucked back in the corner it’s really hidden from the rest of the harbour. Entering False Creek is something like entering a beehive of boating activity. We still have the kayaks, sail boards, kite boarders, paddle boarders, sailors,and motor boats but in addition we have a fleet of water taxis all scurrying about. This in a channel no more than 300 feet wide.

I had done on the research months before but what I had forgotten was that the placement of the False Creek Yacht Club on the Yacht Destinations map was wrong.

What difference does a few degrees make?

Where the little flag is positioned is actually Fishermans Wharf terminal. The Yacht club is up the Creek on the other side under the Granville Island bridge.

So this is how the story goes. You can’t make this stuff up! We maneuver up the Creek dodging every kind of water craft you can imagine. I had made reservations in advance for a slip just in case we could not get a reciprocal. (Thank God!) I call the after hours number and the dock master tells us to pull into D dock right behind a trawler named “Grace”. Great. I look on the chart, find False Creek Yacht Club and proceed to traverse up and down this small channel, strewn with water craft, multiple times. We pass a multitude of marinas with a “D” dock but nothing large enough to accommodate Pellucidar and no white trawler named “Grace”. Now keep in mind we had left early that morning, sailed in circles for an hour while we tried to roll out the main, sailed 40 miles across the Strait of Georgia, and we are all exhausted (translate a little grumpy) Finally, we spot an old rickety dock along the Creek with an opening just long enough to slide Pellucidar in between two pilings. Current is running against us but two young men run out to greet us and grab the lines. One would assume they know how to secure a boat to the dock. Never assume.

I jump off the boat in search of the yacht club, Linda and Michael jump off but get distracted by some guy across the fairway yelling that we can’t tie up there and Sara is left on the boat. Luckily we had left the boat running because next we knew it was floating up the creek. Sara, quick as a bunny, jumped behind the helm and got the boat back to the dock. The two guys that were “helping” had just left the lines and followed me to the Yacht club. One too many barley pops I would imagine. We got our neighbor calmed down and let him know we were just stopping to ask for directions. This was the False Creek Yacht Club but we determined fairly quickly there was no room for us at this marina and I obviously had my information messed up. After speaking with a few other people on the dock we were directed across the creek to another group of marinas. We wove our way back down the creek and into Fishermans Terminal. All of a sudden the docks were large enough to hold Pellucidar and there was a “D” dock. We rounded the end of the float and what do my wandering eyes see but a boat named “Grace”! We were one very happy crew! 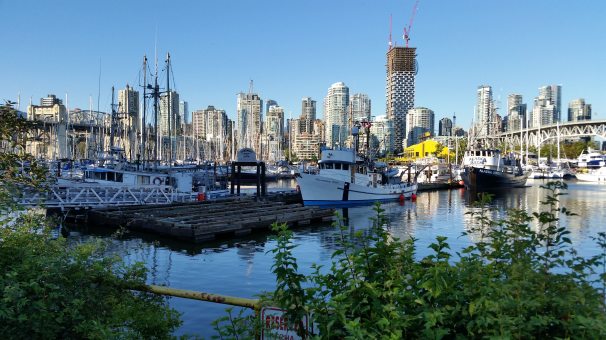 Fishermans Wharf is where you want to be in Vancouver. The docks are in good shape, 24 hour security, clean restrooms and you are within walking distance of Granville Island. By the time we got the boat secured ( we tied our own lines this time) and got cleaned up it was pretty late. Not to be deterred from a celebration of a successful albeit eventful day we walked over to The Keg Restaurant for a late supper. We used to have a few of these in the states but I believe the only one left is in Lynnwood. We miss the Keg. Food is always excellent and service outstanding. This was no exception. 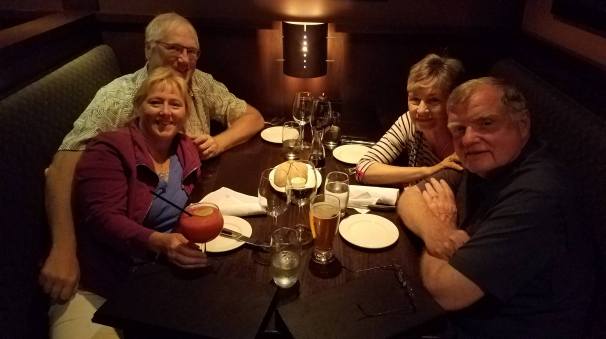 The next morning after a solid night’s sleep we wandered up to a little breakfast stop on the island. After breakfast we strolled among the various shops and into the public market. The market is one of my all time favorites. It’s much like a condensed version of Pike Place Market in Seattle.

In the afternoon Michael and I decided to walk the other way past the marina, under the Burrard Bridge to the Vancouver Maritime Museum. 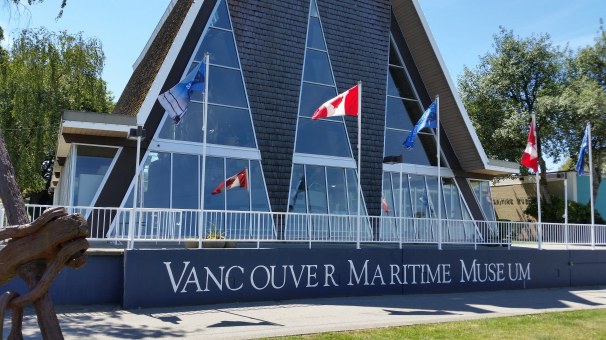 It was a pleasant surprise to find out we had complimentary admission as this was Father’s Day. Michael and I spent the entire afternoon touring the various exhibits and displays.

Our guests were flying out tomorrow afternoon so we gathered at the boat for one last dinner aboard. As the sunset reflected off the building, we reflected on our last two weeks in the islands over coffee and Baileys.

We had such a fun two weeks with our friends there is no reason their departure should be anything but smooth, right? HERTZ (Not Exactly) We had arranged with the marina for a taxi to pick up our friends for the run to the airport. Fortunately, we decided to check in early. Unfortunately, we discovered they had forgotten to arrange for a taxi and there did not seem to be any available in the near future…..

If we are good at anything, it’s looking at a situation, figuring out what is possible and not worrying too much about things out of our control. Michael had noticed an area on Granville Island where the taxis were circling on a very regular basis. Plan B Activated! Michael and I high tailed it to Granville Island to snag a taxi. We were successful and heading back when we got a call that the girls were able to secure a taxi as well. When it rains, it pours! In the end we picked one driver and “took care” of the second driver and sent him on his way. Everyone ended up happy and our friends made it to the airport in plenty of time.

We were sad for our friends to leave but We are fairly certain there will have other adventures together in the future. 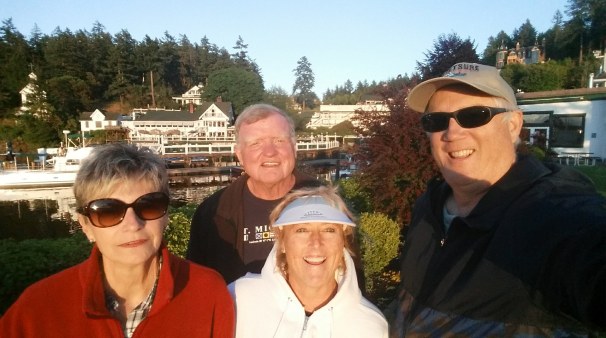 The next day Linda and I make a run back across the Strait of Georgia and continue the adventure…..