It was with mixed emotions we pulled out of Telegraph Harbour. We had such a wonderful two days we hated to leave but the wind was up and we had a long way to go today. We motored out of the marina but it was not long before we had the sails up and running before the wind along Penelakut Island.

We had a good force 5 wind behind us so there was some pressure on the sails. We noticed the main had not rolled out like it should so rather than risk damage later we decided to fix it. After several tacks a few gybes and some funny looks from other sailors, we finally got the sail to unfurl. The rest of the day was amazing. 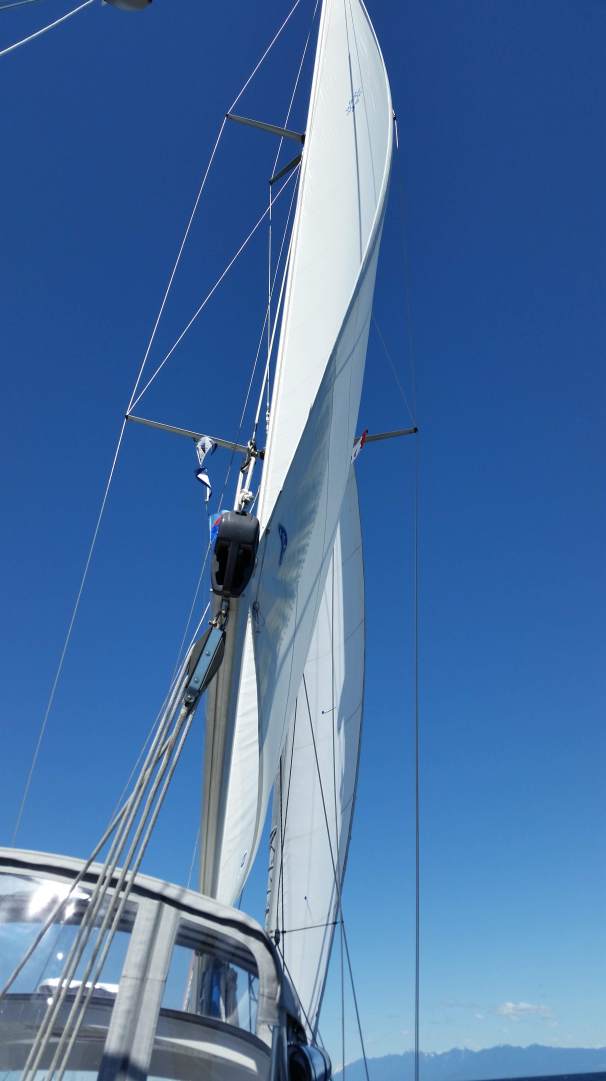 Sails happy and full of wind

I wish we had more pictures of this part of our passage but we were just a tad busy. We rounded Tent Island and started beating up Houstoun Passage along the Secretary Islands. I tried to turn around the top of Salt Spring Island but realized my mistake before we got too far off course. Wind was picking up so we furled the Yankee and pulled out the stay sail. The self tacking stay sail was the perfect combination. We found ourselves tacking around a tug and tow coming between Mowgli and Norway Islands. The self tacking sail was a godsend in these types of situations. What my little detour did was add about 45 minutes to our exit out Porlier Pass. The extra 45 minutes changed what should have been a precisely timed calm passage through the pass into a short duration of 4′ to 6′ standing waves that Pellucidar powered through without missing a beat. A few bumps but no beats!

Once we got through the pass the winds ranged from F6 to F7. The boat and crew found their groove and we enjoyed a great sail across the strait.

Our course took us across the channel at first but as we got got closer to the coast the wind clocked and took us right into Burrard Inlet.

We thought entering Victoria Harbour was nuts. Entering Vancouver the wind was still blowing at Force 6 (21 – 26 knots) straight into the harbour. Large ships at anchor we could steer around. If the kayakers, sail boats, dingy sailors, and sail boards weren’t enough, we had kite boarders dropping out of the sky right in front of us! 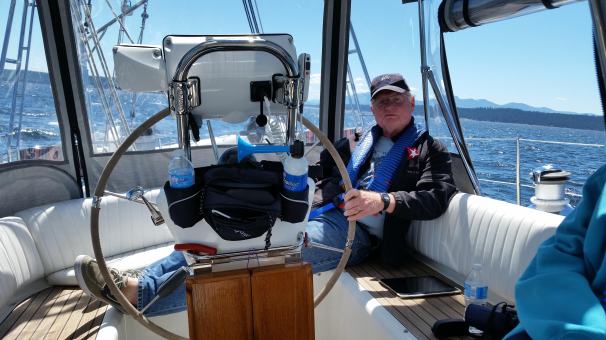 Michael at the helm BEFORE entering Vancouver

As we headed for our marina in False Creek we came upon a 30′ sailboat straining at its anchor with an older gentleman standing on the side rail waving what looked to be a white piece of paper. The boat was coming out of the water at both ends as the waves coming into the harbour were huge. Linda said, “I think he it trying to get our attention” At the time I was at the helm so slowed the boat down and headed toward him. Michael cautioned me about getting too close in the current sea conditions so we circled him close enough to get a jest of the situation without putting either one of the boats in danger. Long story short he had wrapped a line around his prop shaft and wanted us to call his wife. Long story short, we radioed the Coast Guard and stayed on station until we saw a boat coming out for him. Their response time was amazing and we continued on toward our destination at False Creek.

False Creek – that will have to wait till next time.