The next morning after breakfast dishes and morning rituals, we set out toward the town. (Not a long walk as “town” is at the top of the dock) Roche harbor has a rich history of lime processing all the way back to 1860. In 1886, John McMillin, along with his partners in the Tacoma Lime Company, purchased the mill. They grew to over 800 employees and a pre crash value in 1929 of over 1 million dollars. The quality of Roche Harbor Lime at that time was world renowned with a purity level of 99.63%.

The ladies toured the shops while Michael and I walked along the old power generating plant and up to the marine store. The store was small and quaint but things may soon change. In Friday Harbor we had learned the West Marine on the island recently closed. Walking into the marine store in Roche we overheard a similar discussion. Not sure if the local merchants see this as an opportunity or as an indication of things to come.

We joined the girls in town setting off to dig a little deeper. First on our agenda was to locate the John S McMillin Mausoleum at Afterglow Vista. We walked up behind the hotel and out toward the airport.  On the way we wandered through the Sculpture Park and Nature Reserve. There is an abundance of interesting art pieces spread over 20 acres. You could spend all day just in this one area. 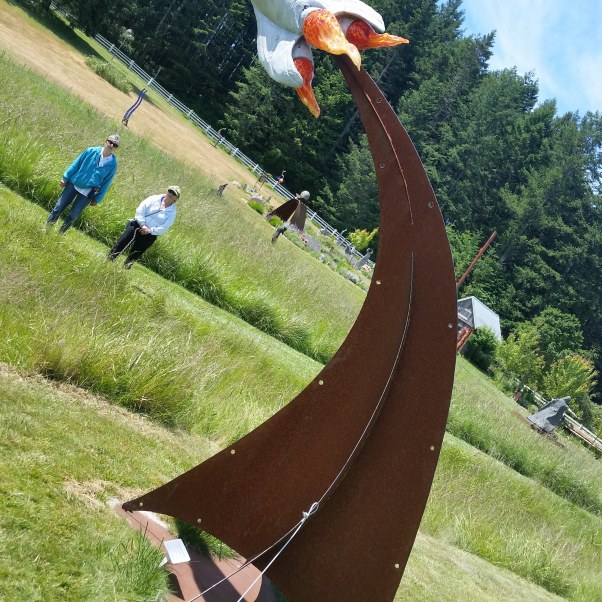 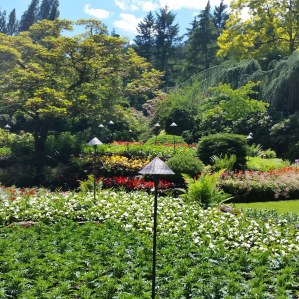 We continued up the road past the air field. Looking back toward the North we looked out over Roach Harbor. You can just make out Pellucidar just left of the first tent peak on the left. 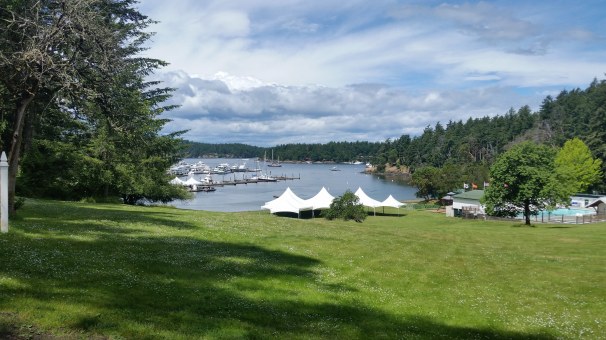 We then veered off to a trail that took us up over the hill and along some of the family grave sites.  Honestly I think we took the path of “lots” resistance! Once you reach the Afterglow Vista, you realize there was a lot of thought put into the message John McMillin wanted to leave. I was a little taken back by the location. When you visit I think you will see what I mean. I expected – nope, I’m not going to spoil it….. 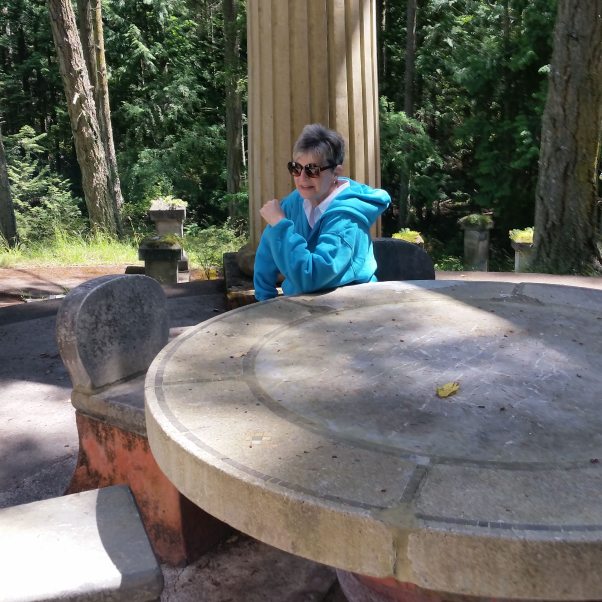 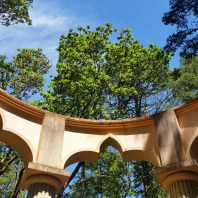 The mausoleum was never completed. A brass dome was said to have been ordered to cover the table but later cancelled by the son. There is a lot more to this historic place. I encourage you to visit and do some research on this area. I think you will be as fascinated as we were.

Back to town as we had a date with a distillery! Westcott Bay Cider and San Juan Distillery is on the North End of San Juan Island. The original plan was to anchor in Westcott Bay, take the dingy to shore and hike up to the distillery. We found out the distillery was not near the water. The girls worked their magic on one of the poor hotel staff and talked him into giving us a ride. I don’t think this was very popular with his boss but we sure appreciated the lift.

The distillery is open on the weekends during the summer months from 1pm to 4pm and they give tours with samples! The tour was very fun and informative. They are well known for their cider but make other spirits too. The apples are grown right on the property as the climate in Westcott Bay is very similar to that of Normandy, France. 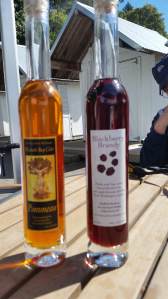 Sad to say neither has been cracked yet. We may have to wait until Michael and Sara come back…….. Probably not!

Roche Harbor should be on your list of things to do. Plan more than a day. If you don’t have a boat, take the ferry to Friday Harbor and drive up.

What did we learn? Don’t take anything for granted in the Pacific NW. Dig a little deeper and you will find the hidden  treasures that beg to be explored.

Next we untie the lines and head for Victoria!