Monday AM we hoisted anchor and motored out of Gig Harbor toward the Tacoma Narrows. We hit the Narrows near max flood providing a sleigh ride and record speeds for most of us. I think we saw 12+ knots as we ran under the bridge. Just as we were passing Fox Island, we encounter the most sea life we had seen thus far. Seals would poke their heads up as we pass, dolphins played in the various bays along the way, and lots of brightly colored jelly fish everywhere. Our original route to Longbranch was around the South West End of McNiel island. At the last moment we decided to run up the North East end and down through Pitt Pass. 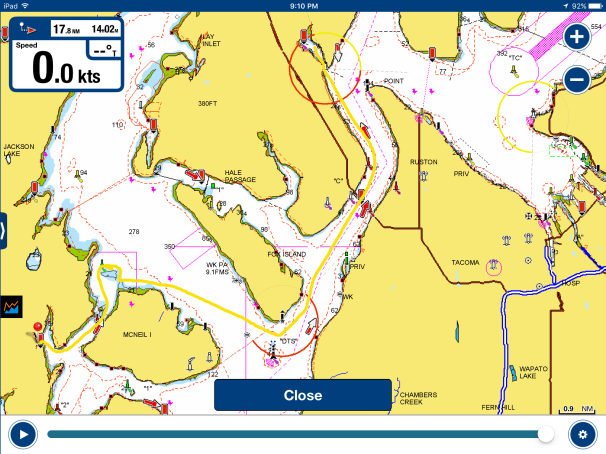 It was a beautiful day but again, not enough wind to sail so we just motored through the glassy water enjoying the passing scenery. As we got nearer to the Pitt Pass channel marker, we caught a whale spout off the stern of the boat. We did a quick U turn and saw a couple of smaller whales playing in the distance. We never were able to get close enough for a photo but it was fun to see. We continued on past Pitt Island and into Pitt Passage, then turned into Filucy Bay. At the head of the bay is Longbranch Marina. 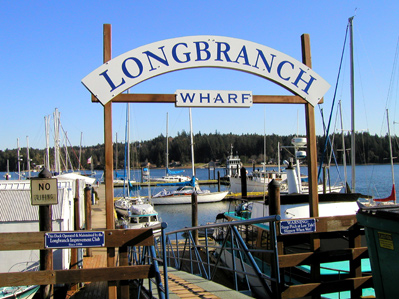 Looking straight out the bay from the dock is the best view of Mount Rainer that I can remember. The Mountain from this perspective is absolutely stunning.

We were out of crab we had caught in Kingston so launched the dingy, loaded our crabbing gear, and prepared the traps for battle. We ran out past Mahnckes Point to set a couple of crab pots. We dropped them about 300 yards straight off the old pier in about 70′ of water. We did not see any other pots and thought we had better check the rules for this area when we get back to the dock. Funny how many opinions can form before anyone of us got out a rule book. This stirred up quite a lively conversation until Pam finally came to the rescue with the official word after looking up the regulations. We took a nice tour around the bay in the kayak then settled in for a nice afternoon visit under the shelter.

Running out to check on the crab pots the engine on the dingy just died. Hmmmm. It restarted, ran for a bit, and died again. We managed to nurse it along just long enough to retrieve some very nice Red Rock crab for dinner and launch another pot. On the run back to the dock it died again and would not restart. A local gentlemen came by and towed us in. Dale, one of the members of our group, had some outboard experience and with a screw driver and magic hands made out little outboard come back to life. We think we got a little water in the fuel or something is getting stuck in the carb. Time will tell. She seemed to perform just fine for the rest of the week.

We had a nice potluck on the dock and visited until well into the evening. Tomorrow we catch the tide for Jarrell Cove on Hartstene Island.