Walt and Lorrelet Knowles purchased their Moody 46 about the same week that Linda and I purchased ours. We both ended up at the Port of Everett. Not too long after Will and Sara brought home their Moody 38, Solstice. The beginnings of a group were starting to form. Walt thought it would be nice to see how many Moody owners there are on the West side and particularly in the NW and organize a rendezvous. A list was gathered between the Moody Owners membership list as well as some very enthusiastic help from the Americas Chapter Captain, Peter Robinson. From that list, emails were sent, discussions of various dates ensued and we landed on the weekend of June 18th at Fort Flagler State Park on Marrestone Island. Sadly we had a few that could not make it for various reasons but hopefully we will meet up at some point during our cruising adventures. We had 4 boats that were able to participate as well as John and Jill from Ursa Major, who drove all the way from Gig Harbor to attend happy hour and dinner Saturday night.

In attendance we had Jeff and Kim on Heron, a Moody 54. Walt and Lorrelett Knowels on Braesail, a Moody 46. Daragh and Cathy (and George) on Chantey V, a Moody 376. John and Jill from Ursa Major, a Moody 346. (Arrived by car) And us on Pellucidar, our Moody 47. 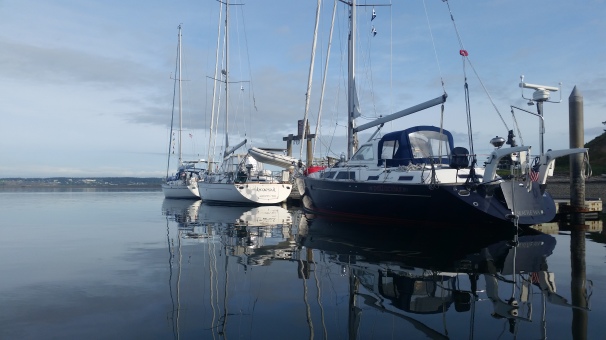 Fort Flagler is a very nice state park although the entrance is a bit trickey. As you enter pay very close attention to the channel markers and watch your depth sounder closely! It’s opens up eventually and looks like one could spend a couple of days in here exploring. The currents can run strong so keep a weather eye out. 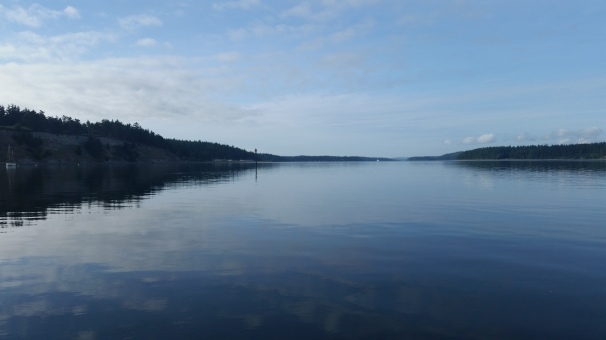 Three of us were able to “fit” on the dock and Jeff chose to anchor out. There is even a little beach cafe serving hamburgers, hot dogs, ice cream and very basic provisional items. It’s quite a hike to the fort so wear comfortable walking shoes if that is on your agenda.

Saturday morning we slept later than normal for us. We made a quick breakfast then launched the dingy and headed down the bay about a mile to where Heron lay at anchor. We had a great visit with Kim and Jeff. Their boat is absolutely beautiful and has been all over the Pacific Northwest.

About 11:30 we headed back to the dock for our first official event, BBQ! Walt and Lorrelette had provided all the fixings for a great hot dog lunch. 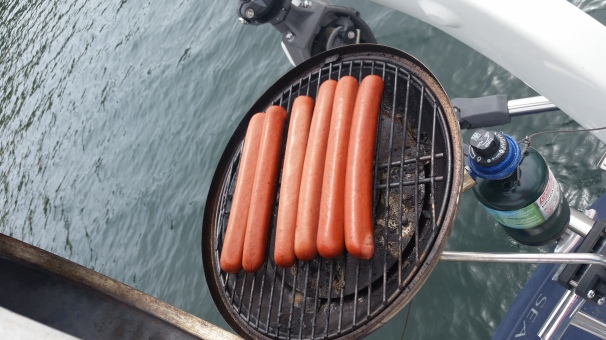 Everyone brought a little something. Cathy even found a potted flower on the beach to dress up the table! We used the side deck of Pellucidar to display and serve lunch from. What a feast. 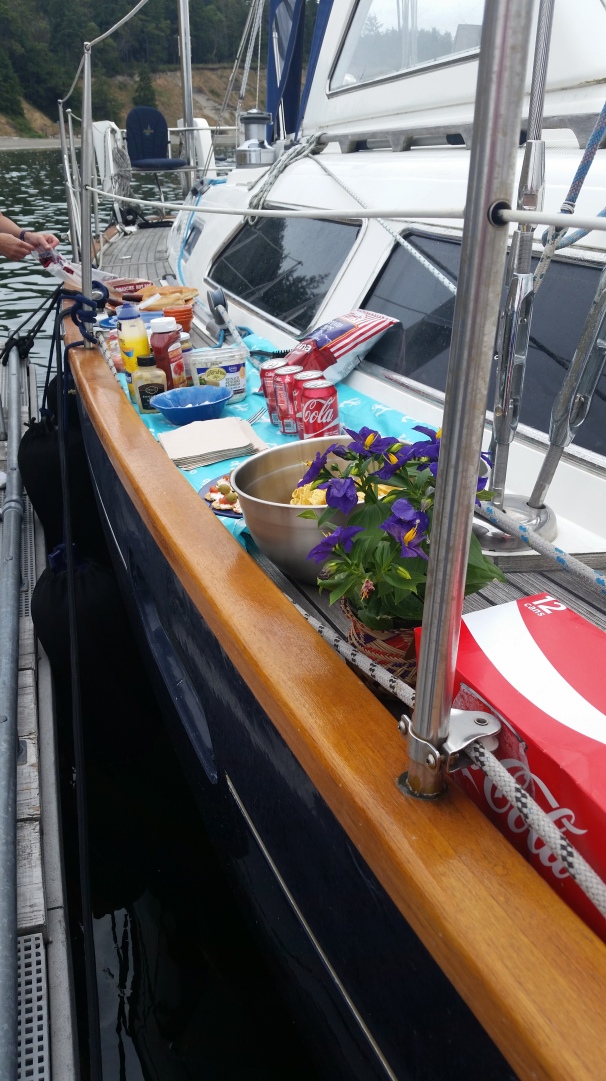 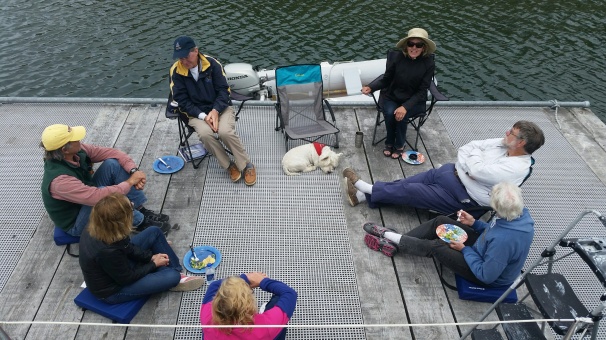 More visiting until it was nap time. Had to rest up for the evening event. Linda and I decided to head up the beach. On the way in we had spotted a sail boat run aground so we walked up to have a look. Isabella had not been there all that long but was in rough shape. She was an older sloop rig with what I would call a split cabin with both companion ways exiting in the center cockpit. She was holed on the starboard side and rudder bent over to port. Various pieces of her were strewn up and down the beach. Very sad. Makes you wonder what her story was.

Dinner was a potluck affair with all of us cozy around Braesail’s salon table. Everyone brought something a little different. That and the lively conversations flowing made for a wonderful evening.

Later that night Linda and I finally had a chance to visit with Daragh and Cathy from SV Chaney V. They have put over 30k miles under their keel since 2011. We learned a lot from the short time we spent with them and hope to catch up with them again sometime in the future.

We have an abundance of enjoyable weekends and this ranks right up there with the best of them. New friends, great food, a new location for us and a very relaxing time.

Next weekend is summer solstice at the back bay in Port Ludlow with Milltown Sailing. This is one of our favorite destinations of the year.